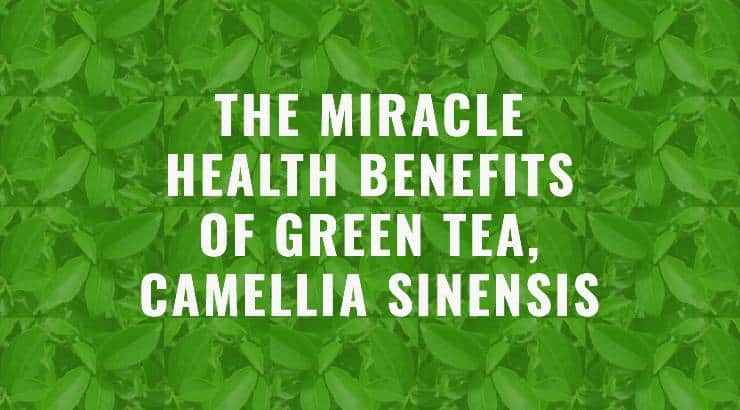 Green tea was first discovered in China and has been associated with good health ever since. But legend has it that in 2737 BC Emperor Shen Nung, who was known as the "Divine Healer", was boiling his drinking water when some tea leaves accidentally blew into the pot. The Emperor noted a delightful aroma and, upon sipping the beverage, proclaimed it to be good for health and well-being, and so began the drinking of tea.

What makes Green Tea so special?

Green tea leaves come from the Camellia Sinensis plant, a bushy shrub native to Asia, and are the common source for black, oolong and green teas. Unlike black tea and oolong tea which are fermented, green tea production does not involve the oxidation of young tea leaves. Green tea is produced from steaming fresh leaves at high temperatures, thereby inactivating the oxidizing enzymes and leaving the polyphenols content intact.

The Polyphenols found in green tea are more commonly known as flavonoids or catechins. One of the main catechins is a rich antioxidant called Epigallocatechin-3-gallate (EGCG). EGCG is 100 times more effective than Vitamin C and 25 times more effective than Vitamin E at protecting cells and DNA from free radical damage linked to many diseases. This antioxidant has twice the benefits of Resveratrol, a polyphenol found in red wine, that is also known to limit the negative effects of smoking and a fatty diet.

Benefits of Green Tea for health and well-being

The Chinese and Japanese have known about the medicinal benefits of green tea since ancient times, using it to treat everything from headaches to depression. Green tea has been shown to have many positive health effects, which include anti-cancer, anti-inflammatory, antioxidant, antimicrobial, cardiovascular, dermatologic, hematologic, metabolic and neurological effects.

Oxidation is an essential part of many natural metabolic reactions in our body. It is the oxidation of some compounds, such as fats, that can lead to the creation of "free radicals" which are harmful to the body and can cause damage to our cells.

An excessive build-up of these free radicals not only leads to cell damage, but ultimately over time can result in various states of chronic diseases, inflammation, and accelerating the aging process. Some of these conditions include heart disease (resulting from LDL oxidation), renal disease and failure, several types of cancer, skin exposure damage caused by ultraviolet A and B rays, as well as many diseases associated with the onset of aging.

Green tea polyphenols are potent free-radical scavengers due to the hydroxyl group in their chemical structure. These hydroxyl groups can bind with free radicals to neutralize them, preventing reactions between free radicals and DNA, and resulted in mutations that can adversely affect the cell cycle and potentially lead to malignancy and other diseases.

Scientific research in both Asia and the west is providing hard evidence that suggests that green tea may help prevent all three phases of tumor development: initiation, promotion, and progression. While the studies are not conclusive, green tea polyphenols, particularly EGCG, may be effective in preventing and/or inhibiting various cancers including, prostate, breast, liver, lung skin and leukemia.

Due to the ever-growing obesity pande mic, the anti-obesity effects of green tea are being increasingly investigated in cell and human studies. Recent studies on green tea's thermogenic properties have demonstrated that catechin polyphenols, and epigallocatechin 3 gallate (EGCG), have been demonstrated to prolong the body's own metabolic rate of burning calories by slowing the rise in blood sugar following a meal.

It does this by slowing the action of a particular digestive enzyme called amylase. This enzyme is pivotal in the breakdown of starches (carbs), which can cause blood sugar levels to soar following a meal.

Hello, my name is Ollie. I am an home business entrepreneur, coach and blogger living near Brighton, UK. This is my blog, where I post my photos, news about home business streams, share resources and marketing tips. I also help busy people to detox, lose weight & achieve optimal health with a fast easy certified organics program. DM me here.

Hello, my name is Ollie. I am an home business entrepreneur, coach and blogger living near Brighton, UK. This is my blog, where I post my photos, news about home business streams, share resources and marketing tips. I also help busy people to detox, lose weight & achieve optimal health with a fast easy certified organics program. You can reach out to me here

What’s the difference between Probiotics vs. Prebiotics vs. Synbiotics?

Benefits Of Magnesium For Heart Health And Well-Being

The Truth About Stress Effects On Your Health Is About To Be Revealed: Top 7 Causes You Need To Know

Effective Relief For Your Dry Eyes

PS: The cost of living crisis is real and getting worse.

I show people how we are beating the cost of living crisis by earning enough money to make their bank account bigger and their bills smaller. If you'd ever like to know, I'll be glad to show you.